During 1927 Rely-a-Bell appointed a Mr Thompson (who had previously been employed by the Post Office) to create a receiving centre for signals from remote alarm systems similar to that operated by Holmes Protection in New York. This was called a Central Station and is nowadays referred to as an Alarm Receiving Centre.The following photograph is believed to be an early picture of the Rely-a-Bell Central Station based in the City of London, believed to be Wilson Street.

Now demolished, 54 Wilson Street had been occupied by an alarm company since Rely-a-Bell (formed in 1904 as part of Thomas Gunn's ironmongery busines which developed into an electrical firm) took over the premises in 1935. In these early days alarms were installed by their own staff but servicing was carried out by subcontractors until the late 1950's when provincial branches were opened. 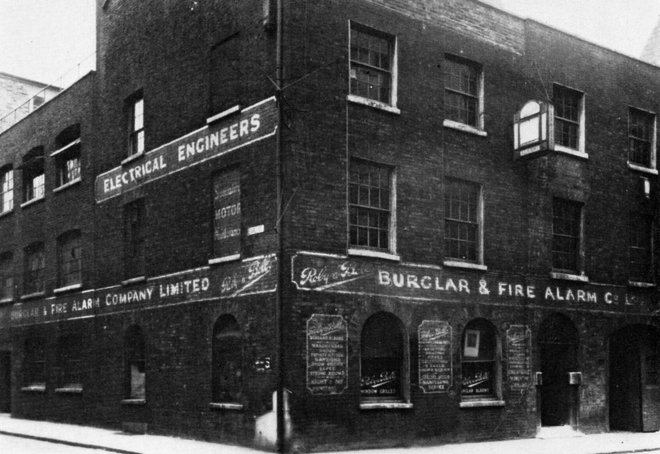 During the 2nd World War the well known personalities; Ron Warren (1940), Stan Groom (1941), Arthur Bishop (1944) and Ron Cotton (1946) joined as boys working for the princly sum of £1 per week. During this period Victor Gunn ran the business with a Mr Tibbles. Evidently two of Tibbles sons ran Auto Call a major competitior at that time. Arthur Bishop, recalled his early days as a boy pushing a hand cart, from the premises in the City to various premises where alarms where to be installed. Arthur subsequently became a General Manager but not long after the "merger" he left to join Modern Alarms. Ron Cotton later also joined Brock Alarms.

Speaking at a conferance in 1985; from left to right, Ron Warren, Ron Cotton, Stan Groom and Arthur Bishop. Another well known employee was Sam Hart who joined Thomas Gunn in 1920 as an apprentice and retired from Chubb in 1970. Was he the first person to work 50 years in the alarm industry?

Due to the then high cost of hiring land lines (hard wired telecommunication paths) the geographical area served by this monitoring service was restricted to a radius of about one and half miles (2km). Consequently many of the systems outside this area, when activated, rang an external Bell. 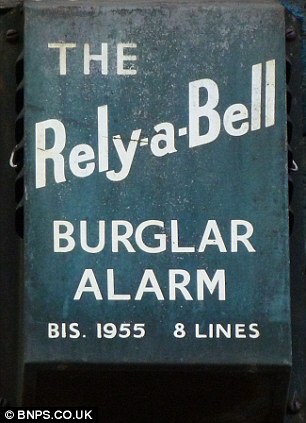