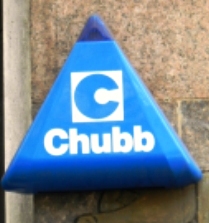 The combined business grew with regional branches in Norwich (Michael Cook), Plymouth (Pat Donahuge), Cardiff (John Nurse), Maidstone (Tom Riley), Brighton (John Thorpe), Liverpool (Bill Galston), Preston (Bob Crew), Newcastle (Harry Armstrong), Edinburgh, (?????) Dundee and Aberdeen (Charlie Sharkey). Terry Wallace took over the Bank Division which had relocated to the now Regional Office of London - Wilson Street and eventually a separate Special Security Division was formed as a result of some large contracts awarded to the company by the Home Office Prison Department. This division took over all government work and was headed by Bernard Harwood. Exports were also a growth area and under the Chubb world wide banner Chubb Alarm Companies were formed and operated in all the former British Colonies. Outside this area Dennis Crighton was responsible for overseas work.

With the advent of the "Transistor age" electronic technology became a vital part of the businesses and Ken Banks from EMI became Technical Director and together with Ernie Penfold (MD at Chubb Alarms Manufacturing) introduced new and upgraded products using the latest technology.Ken Banks took over as Managing Director. Competition became much stronger as new firms were emerging and old firms were growing by acquisition. Equipment was introduced into the market place from the USA. This enabled new small businesses to start up, as they had not previously been able to purchase the necessary parts, as such equipment had been exclusively manufactured by the larger Company's.